Well, maybe they do. Truthfully, I wouldn’t know, but I can’t help but reckon that those who walk around claiming to “perfectly enlightened” are probably at least partially faking it – if not out and out bullshitting us all – and so therefore they must have some pretty human moments. Try and picture it with me … 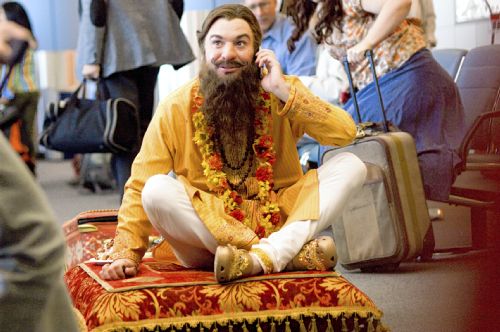 The seminar is over and the Guru has slipped into some casual attire and is down in the hotel lobby having a scotch, listening to the depressingly blue jazz band and trying to catch the eye of a pretty business woman. Unfortunately she turns her nose up at him so he downs his drink and retires to his room; yet another one. They all look the same. He checks his email. Nothing interesting; just work and irritating questions from a few of the more obsessive disciples. “Why can’t they just switch on their brains and sort out their own problems?” he mutters, “Ah well – it’s a living.” He flops on the bed and flicks on the TV. Sport. More sport. Bad movies. Oooh! Porn! Oh, unless you pay for it the screen goes blank after thirty seconds… “Bah,” thinks the Guru. “Might as well turn in, gotta be up early for tomorrow’s flight to Seattle”.

The Set Up When I hear people rave on about being perfectly enlightened I can’t help but feel a little cynical. Why do they feel the need to set themselves up to be so flawless? Well the reason is simple: By setting themselves up as being Enlightened (or Rich, or Fit, or Productive, or Whatever) what they in fact are saying is “I am more Enlightened than you“. (Or rich or whatever.)

This then triggers in you a longing to be like you perceive them to be. Surely then you too can be rid of all that nasty fear, angst, depression, regret and the rest of the bad feelings that come with the package that is “being human”. Proclaiming perfection creates a tension in you, and that tension makes you buy their stuff. Not that there is necessarily a problem there. If their stuff makes you feel better, even for a little while, then it is probably a good thing. And if all you do is make an effort to learn something and improve yourself a little – then great. But read back over the last line of the preceding paragraph. See anything wrong with this picture? Gurus Create Tension!?! That’s just crazy! Isn’t it their job to relieve you of tension? Nope.

It should be, but in reality their job description is just the opposite.

The Perfectly Enlightened guru makes you feel un-enlightened. The Perfectly Fit guru makes you feel like a fat slob. The Totally Rich guru makes you feel like a worthless loser. They have to – otherwise you wouldn’t buy their book. Which might be fine with the Fit guy or the Rich guy (as long as you have, at least to some extent, the wisdom to rise above the Ego and its desire for what it perceives you lack). Chances are they ARE super-fit or super-rich (doesn’t mean they aren’t jerks though). But the “Perfectly Enlightened” guy? That’s a whole ‘nother story. Ain’t no such thing, Dude. Ain’t no such thing. Further Reading: Zen is Boring You are already enlightened.