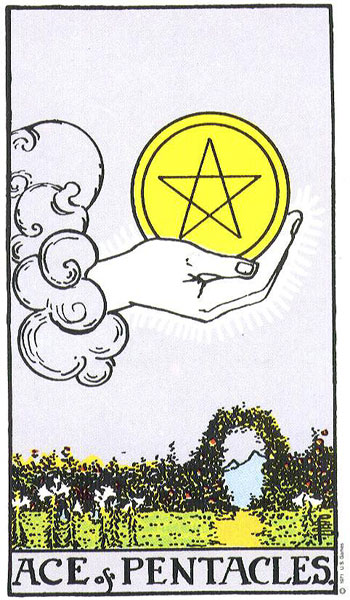 It’s the last day of the working year, about 3pm, and after a busy morning rushing about tying up loose ends, I am sitting in my office listening to a new Christmas drinking song by some old friends and staring at my new FUCKING AWESOME Rebel Zen logo that I created last night (see above) and this here website and thinking about how I have committed fully to making Rebel Zen a successful business next year.

As a fully-qualified, out-of-the-closet, woo-woo tripper extraordinaire, I thought I’d draw a tarot card. I had no question in mind, I was just focussing on Rebel Zen, next year, what it brings, what the energy surrounding the project is…

The Ace of Pentacles indicates abundance, in the form of a gift from the Universe, but you must act to claim it, work brings the gifts of the Universe into physical reality. Lazy fuckers get nada (usually).

Pentacles are all about the physical plane, the Earth element. Ideas, emotions and words are one thing – but the solid matter of life and the realities of surviving and thriving in the physical world are another.

And yet the Pentacles are a very magical suit: the magic is all around us, things that we are used to, the so-called mundane, are in fact incredible. To be truly awakened is not just to have grand visions of fantastical things and potential eventualities but to see, every day, the magic that surrounds us on this amazing planet we call home. You only need to stop rushing about for a few minutes and just take the time to stare closely at a flower, at a face, at the sky and whammo – suddenly you remember – this world is fucking incredible! It’s lush, it’s magical and it’s abundant in riches of all kinds.

Aces are about beginnings, fresh starts, so to me this card today talks to me about the resurrection that Rebel Zen is currently going through as it wakes, but by bit, from its slumber. As the year kicks off, it will spring out of bed and start shaking and shimmying for all to see. To this the Ace of Pentacles says “Good! Because all you need to do is focus, believe, act and persist and the gift is yours – here it is – just take it!”

Today the Ace of Pentacles doesn’t just speak to me of the gifts it will give me – that of a way to build the kind of career I will really, REALLY enjoy, own and grow rich(er) from – but it also speaks of the gift it will bring to many, from the casual reader passing through the blog to the most ardent supporter of the brand. Rebel Zen’s stated mission (in the plan I am nearly finished writing) is “To inspire and empower people to break on through to the awesome side”. As you can see up top, the last part of that line forms the brand’s new tagline (what do you think? Fucking witty non?).

Christmas Pressies For Everyone

So whether it’s that you want to feel happier, less stressed, more confident, more focussed or more successful in your creative career and personal life then this little puppy that I am a-rearing is going to be your faithful ol’ hound dawg. Before you know it, it’ll be protecting you, loving you, covering you in sloppy tongue-kisses and, dammit, reminding you to get out there and go for a freakin’ walk already.

Rebel Zen will only succeed by providing things of value to its customers and while these gifts won’t all be free, they will still be a “gift” in that they will be chock-a-block packed full o’ usefulness and value to all who come to this Bloody Huge Party of Awesome In The Sky that I am throwing in 2013.

(However, it wouldn’t be Chrissie without an actual free gift now would it, so you should go over to Anxiety Slayer and listen to the podcast. I get interviewed there by the lovely Shann and we discuss, you know, normal stuff like paranoid delusions, alien encounters and the new ebook I just released called Anxiety Meditation, which you can download for free via their blog for a short while.

I am going to spruce the book up a little after the holidays and then start charging for it so be quick, small mouse, before I whip the cheese out from under your twitchy little nose…)

Now where were we? Oh yeah …  interestingly, in Biddy Tarot, a great site for tarot card definitions, there is a final paragraph about the card that speaks of adding something new, introducing a new element. This is really exciting for me because there are going to be a bunch of new elements added to the Rebel Zen experience next year but the major one is, I think, an expectation-defying birth of a new category, no less.

All new ideas actually come about by combining at least two pre-existing ideas (it’s true) and the two ideas I am bringing together under the Rebel Zen banner are going to be majorly, humungously, and downright totally awesome.

I won’t let on what’s in store yet, that would be telling, but I can’t wait to go public with this shit. I am bloody freakin’ excited… and not a little terrified … but mainly excited!