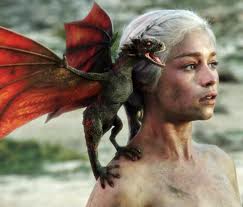 My better half and I have been watching series 3 of Game of Thrones at the moment and while I actually think this 3rd series has been a bit dull compared to the first two, it has been kind of fun watching Daenerys Targaryen (AKA Khaleesi AKA the Mother of Dragons) gathering her army in preparation for the inevitable confrontation.

(SPOILER ALERT) Last night was the episode where the young Second Sons lieutenant, Daario Naharis, betrays his leaders in favour of serving The Queen. Just after he had cheekily appeared in her bathroom to declare his loyalty, charmingly roll a couple of severed heads on the floor and otherwise cleverly use his eyebrows to quite plainly say “You and me, babe, how ‘bout it?”, I commented that “she seems to get everything come to her pretty easily”. To this the wise reply came from across the couch: “Of course – she has dragons!”

Well that insightful comment started pinging around my brain (“there’s a blog post in that!”) and here I am at 5:30am writing it. So that’s it, the Dragon Queen’s secret to getting what you desire is simple…

It makes sense to recognise what your dragons are and leverage them.

An Incomplete List of My Own Hard Rockin’ Dragon Collection

I actually know what I desire. I have it written down and everything. Lately, I have been fighting hard to get it, the war has been on. The enemy is running-out-of-cash-and-having-to-get-a-real-job. I just don’t want that but because I kept putting revenue generation lower down my list of priorities, it has been a real threat to my freedom lately. So for a couple of months I have been getting up early and working immensely hard to keep pushing towards my Major Definite Goal while also re-establishing positive cash flow right now. To do this I have needed to utilise at least three of my dragons:

One of my dragons is hard work. This is hardly a revolutionary trait but still I am not sure that most people go the extra mile. I mean, people go to work and bust their hump of a work day but most don’t get up at 5am every day to work on a larger goal than just getting paid this week. I do.

I could get up at 5am for the rest of my life and work my butt off, but if I didn’t have a singular obsession then I don’t suppose it would get me anywhere in particular. I believe in the power of One Thing and this obsession has to guide everything that you do. Truth is that even within this constraint there is plenty of room to go too broad and dilute your energy. But at least this way when you are way off course you know it and pull yourself up.

A positive obsession for a single goal is a great way to focus your energy to actually get somewhere.

This last dragon is something that I am grateful for as it keeps me from completely failing despite my many (believe me) shortcomings. People like me and want to do business with me, do creative work with me, help me out or just be my friend. This makes a lot of things much easier.

For example, it means that I know if I just show up, I am very likely to get a “yes”. This makes selling for example, possible for me because I am actually technically not much of a salesman. I don’t have the salesman’s killer instinct, I just tend to try and be helpful and thankfully enough people like me that they buy. Without this likeability factor I reckon I’d have gone out of business a long time ago.

There are many dragons I don’t have, but thankfully you can get more by learning new skills. For example, I am currently educating myself into possessing a new dragon called “getting organised in my business in order to scale”. I get my dragons by reading and doing, but you can also go to courses etc if you like.

Thankfully I have enough dragons (more than the three above) that I know I am going to claim the throne that is, Goddamn it, rightfully MINE!

What about you – what dragons do you have and are you leveraging them? What dragons are you trying to claim possession of?