Wow, it has been so long since I wrote one of these and the reason was because I maintained strict radio silence on principle until I had something to show for my efforts.

And now I do! I FINALLY finished the re-edit of my book, Psychedelic Meditation, and converted it into a Kindle e-book. In order to get this done I had to edit the book myself, which meant going through it line by line, fixing the many typos, rewriting sentences and even entire paragraphs, deleting stuff that was just crap and writing the odd new sentence or paragraph where I felt I had something extra to add. The book is eight years old and I wrote the initial thing in a hurry without any real thought for quality of writing so it was quite a job to bring it up to snuff. 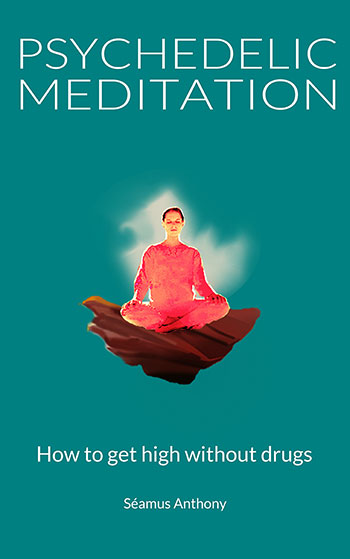 Then I found an editor (thanks Nicholas!) to give it a structural edit and copy edit, then I went through his edits in detail and either accepted or rejected them all individually. Then I again re-read the book with a fine tooth comb looking for more typos. I was surprised how many I still found.

During this period I also found an illustrator (thanks Kai Deng!) to create the new book cover. He sent me back various drafts and I eventually chose the image you can see on the cover now. I then did the graphic design myself, saving some money there as I have some ok skills in that area.

Then it was time to create the Kindle book file itself, this took me a fair while as I have never done this before. I used Scrivener, some software that makes it possible to create the mobi file you need for Kindle. I have to say it was a bit of a bugger to learn and required all of my Google-fu to make it happen. This was the real shit sandwich part of the job but I got there after some chewing of fist down to a stub.

Then I published and promoted it to my personal Facebook friends.

Then I went to work updating the psychedelic meditation website and the listing here in this blog to get it up to scratch with new artwork and pointing to amazon via my affiliate link.

All of this took a lot longer than I anticipated. Mainly it took longer because I went through one of my down-in-the-dumps periods, which unfortunately is a part of my life. I think it is probably a part of most highly creative people’s lives.

In my case it is clear that lifestyle factors play a large role in this. By “lifestyle”, I mean drinking. It is not the only reason I go through dark periods (it happens regardless), but there is no doubt that anything other than the healthiest of lifestyles affects my mood and motivation dramatically.

I did not drink at all throughout 2015 and was very productive all year. Then, during the silly season, I started having a few, which was fine at first as I was still kicking goals, writing every day, all the way up until the end of January. Come February however, I was falling back into my old wild-man habits. Never prone to drinking all day every day, I am nonetheless of the kind of Irish stock that will drink the bar dry once I have a head of steam up. Which is all well and good (I never get into fights or anything, always everyone’s best mate, a happy drunk) but I am no spring chicken and these huge nights lead to epic, multi-day hangovers and deep, dark depression for me.

I don’t mean to give the impression that I was out whooping it up every night for months or anything. In fact I only had five epic nights between February and April, which the younger me would have found pathetic and funny. But for me, at 42, that was enough to seriously dampen my flame from week to week. It was silly of me to return to this kind of lifestyle, even if only briefly. It took me some time to get back to being the best version of myself, but I got there.

Work did not stop altogether during this time, it just slowed dramatically. However, I have now stopped partying again altogether for over a month now and the result in my output is dramatic. I am up every day before breakfast executing and my depression and anxiety levels have fallen away dramatically. I won’t be regressing again in a hurry.

SO! My first Kindle book is released and I would love it if you could give it a review if you have or do read it.

Still to do for this book:

Then I have three other books to edit and upload to Kindle and ideas for multiple new books as yet unwritten!