So last night, kids safely asleep, I drew a suitcase. 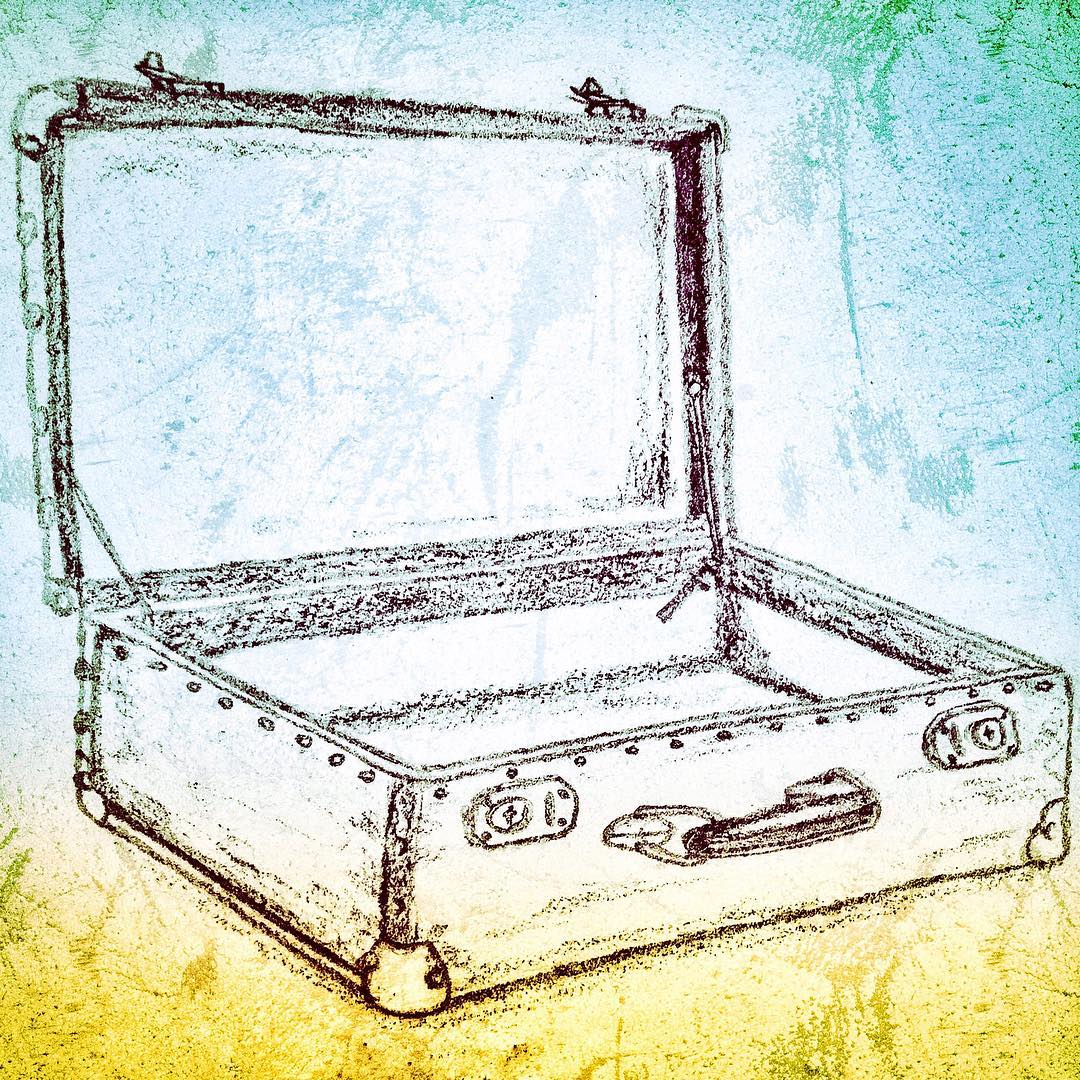 First, I wiped down the kitchen table. Then I made a cup of tea. Then I got out my shiny new Christmas presents from my wonderful little family; some drawing pencils in various shades, an eraser, a sharpener, some pens for inking and a sweet drawing pad. Then I asked myself the Ultimate Question … 2B or not 2B?

In truth it was scary, the clean blank pages. Imposing. But I have an idea for an art piece I want to make and the first stop was to draw a vintage suitcase, which will be part of it. I googled the topic and found one that was at the angle and of the type that I wanted, a stock image with watermarks all over it, and I propped up the ancient ipad on a book stand thing that my daughter uses to read giant fantasy tomes while eating breakfast.

I began drawing, very conscious of the tension I feel about it. That my wife, a skilled illustrator with not one but two art degrees under her belt, was hovering about pretending not to be sticky beaking over my shoulder actually made it worse, not that my hang ups are her fault. The things is, and I think I’ve written about this before, I had my confidence shattered somewhat in my own art abilities as a young man. Well actually, I allowed my confidence to be shattered. I see now that this was nobody’s doing but my own. Nobody can stop you but you and you have to take responsibility for that and stop making excuses.

But that doesn’t mean it is always easy. Here’s what happened:

As a kid I was full of confidence that I was ‘good at art’. Always one of the best in the year group. But then in Year 12, the final year of high school, the art teacher I was lumped with didn’t help much. “All men are pigs,” she once said to my face, and proceeded to sniff at and criticize my work for the course of the year while fawning over my (admittedly highly talented) then-girlfriend.

Said girlfriend and I then applied to both the art schools in Adelaide, our hometown, and she got in to both while I got into neither. I did get into acting school, which was a big deal due to the competition levels and the tiny intake, but actually, I had little interest in acting and soon left to pursue my rock star dreams.

Meanwhile, as of the day the universities rejected my art, I stopped drawing.

I was being a precious little snowflake, but I did stop and then, somehow, a quarter of a century (!!!) went by and during that time I have almost always been surrounded by visual artists, while myself desperately wanting to create art, but suffering from a massive inferiority complex about it and not making any.

But this changed recently. Something just came unblocked and I started again. A couple of weeks ago, I drew a giraffe … from a cutesy little drawing lesson video online … and then I photographed it and imported it into photoshop and started jamming with it, bending it, adding to it, filtering it. Then I drew a weird little cow character from an odd little soft toy that my daughter made me. And I added multiples of them to the giraffe image and then I emailed it to myself and then I put them through various apps on my iphone until I liked what I saw. 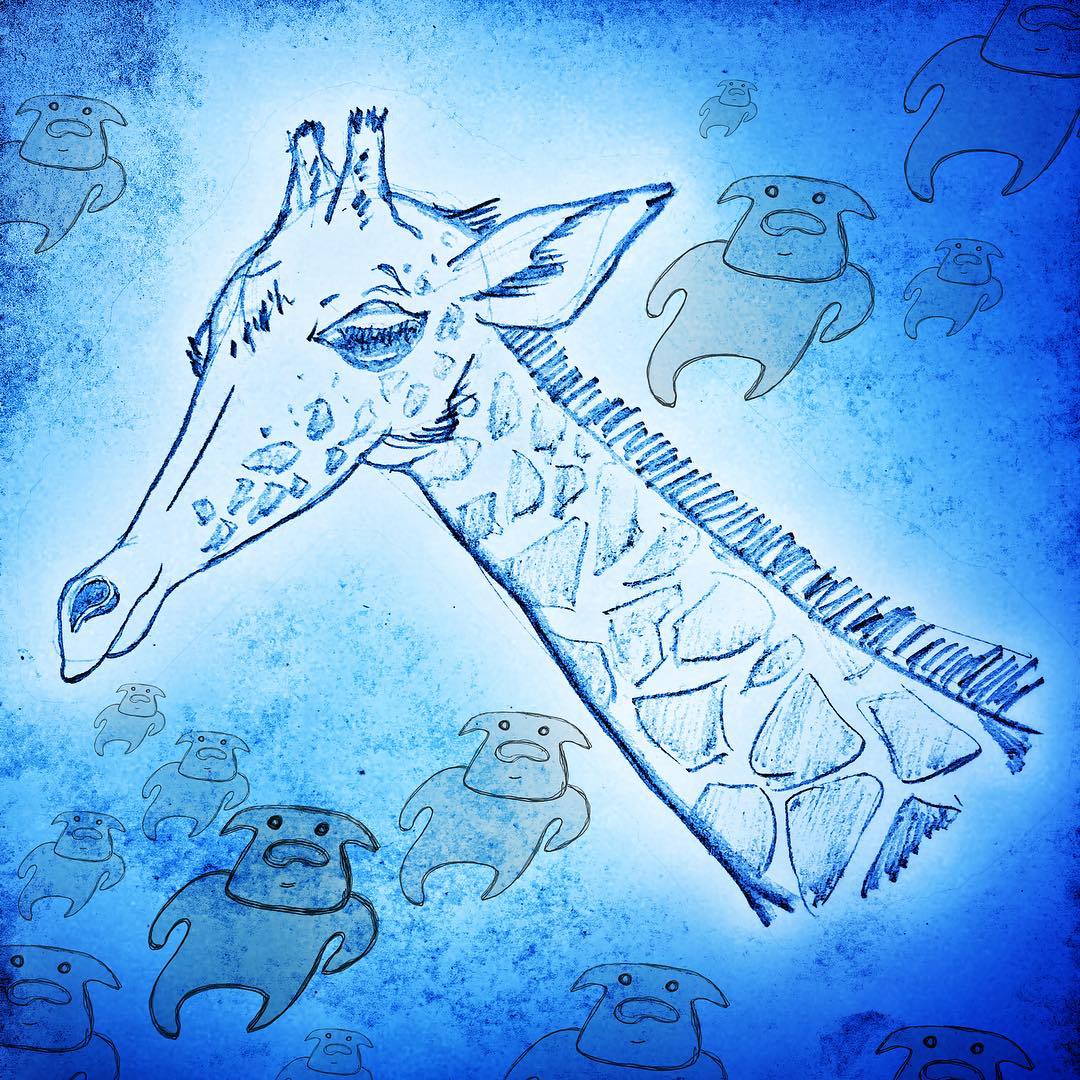 Then I built an instagram account, and a Redbubble store, and a website, and then I made a soundtrack to go with the image and then I animated the image in photoshop so that it made a weird little video….

…and my kids watched the whole thing unfold and I hope I taught them that nobody can stop you making art, because making art is expressing yourself, it is unfolding in the sun like a flower does, like nature intended. It is revealing your pure expression to the world and nobody has the right to muffle that noise. And they actually can’t muffle it, somehow, no matter what, it can come out.

I hope that I teach them that the only one who can stop you is you.

So last night, ignoring the Monkey Mind, I drew a suitcase. It’s not a finished piece, just a study for something I have in my mind that I want to make. Looking at the drawing, I know I am not as good as I am going to get, but I also know I can make art as worthy as anybody else. So I threw it online and went to bed.