“Aloysius Sees The Light” is my first tangible (non-digital) artwork in 25 years. Acrylic paints on canvas.

It’s quite the labour of love, quite weird, quite profound and not quite this shade of blue (there’s more green in it than this shows but taking accurate photos of real paintings is, apparently, kind of hard. Might have to get a pro in to sort that). 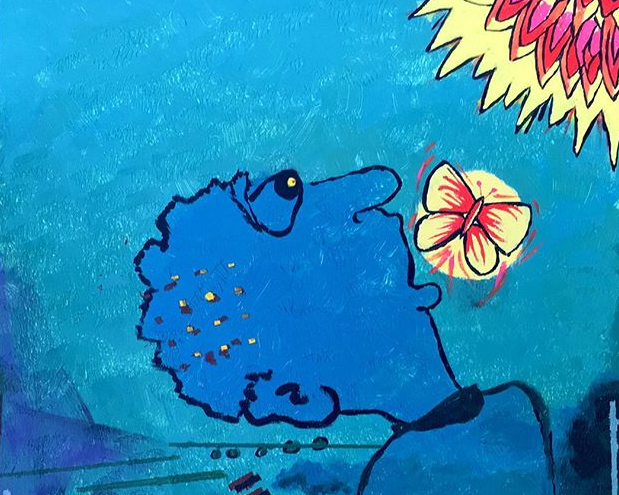 Detail of artwork “Aloysius Sees The Light”, by me, Seamus Anthony, acrylic on canvas, 2018 – click the image to see the whole thing

Aloysius Luck is a character in an album, “Escape from Section C”, that I made some years back with three of my best friends in a band we call Zuiiza. He is the central character in that psychedelic, fever-dream arthouse, space-rock-opera of an album. In the story, which is jumbled and out of order to represent Aloysius’ mental state, Aloysius is a public servant, stressed from working in politics, who has a nervous breakdown when the woman he loves rejects him. He goes temporarily insane and winds up in mental health care.

To start with, Aloysius thinks he is a robot on an alien planet dealing with all manner of dramatic situations involving an evil mastermind, Professor Von Wiggett and his army of mindless zombie style characters, The Hungry.

Eventually we realise that Von Wiggett is actually his therapist and, slowly, slowly, Aloysius comes to understand this too. At the “end” of the story, Aloysius comes good, first in the song “Indivisible”, where he regains a sense of self and of self-empowerment, and then in the song “Aloysius Luck”. In that tune, he leaves it all behind him, driving off into the sunset to start anew.

The scene describes the moment where Aloysius, formerly head-down, obsessing about his internal world, which as you can see on the desk in front of him, is dark and complicated, suddenly looks up and is surprised to “see the light”. The light takes his breath away (represented by the butterfly) and his mind finally cracks open as the light (represented by the little yellow rectangles in his head) merge with the serious scenarios he was previously obsessing about.

The painting means a lot to me as I personally live with and through a repeating cycle of becoming drawn into a dark internal world, full of (needless) worry, stress and anxiety, only to emerge from these dark times full again with the wonder and joy of life. When the light comes calling on me, often in meditation, but sometimes just when I am looking into my children’s faces or simply walking the dog, the hours, days, weeks and months that I sometimes spend drawn into my own darkness seem incomprehensible to me, as I return to the childlike and happy-go-lucky state that I am blessed to sometimes bounce about our planet in.

A wiser man than me once told me that this is a pretty normal state of being for creative people, so as much as I would be happily never venture into the darkness again — and believe me I do try to stay up and out of it – when it does consume me, I console myself with the thought that perhaps this is the price I must pay for the fact that I can compose multi-instrument pieces if music in my mind when I am stuck in traffic, and that I get to enjoy watching inspiring words flow through my fingers seemingly of their own accord, and that now, once again, I get to play with colours and patterns and shapes to make meaning out of this odd thing we call Life.

I hope that this painting of Aloysius ends up in someone’s world. Maybe someone I don’t know, maybe my children’s. Maybe yours? Perhaps hanging on the wall in an office or bedroom, to be seen regularly and to serve as a reminder that – if we only make the effort to look up – there truly is ‘a Light and it never goes out’. It is always waiting for us to seek it out again, to be inspired and consoled and just plain cheered up.

If you didn’t already, you can go see it at the shop, where I have some other artworks for sale also.